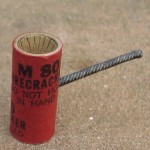 M80’s – The original M80 was a military simulator that was sold as a firecracker. It contained two grams of flash powder and was responsible for hundreds of serious injuries due to its powerful blast. These items were banned by the CPSC in 1966, and made illegal by ATF in the 1970’s. Illegal M80’s sometimes contain compositions that are sensitive to shock and can injure or kill people. Make no mistake – M80’s are not fireworks. They are dangerous explosives and should not be handled by fireworks consumers.

Cherry Bomb – A cherry bomb is a round firecracker, red in color, and approximately one inch in diameter, with a fuse sticking out the side. The original cherry bomb contained more than one gram of flash powder and was very powerful. These were declared illegal in 1966 by the federal government. They are dangerous and are not considered consumer fireworks.

Quarter Sticks – The original quarter sticks were similar to M80’s, but were larger in size and contained 10 grams or more of flash powder. These items were so powerful that they could dismember and kill people who misused them.